My  campaign trip to the Dumfries coastline  to raise last minute support for the ‘Guide to Beach Litter’ developed into an exciting days work on Luce Bay Beach. The bay is vast and the beach extensive and has a great mix of sand, shingle and rocks. Perfect for anyone’s bank holiday.  Thankfully the day was bright and sunny though the brisk very cold winds kept all but the hardy seaside visitors away.

I set the van up as a Sci-Art beach investigation unit alongside the beach, highlighting a selection of my findings so far  and open to all  beach goers. Discussions with intrigued visitors ranged widely from beach litter, to concern about the increasing acid levels in the sea and to fears of over fishing. On the beach I began mocking up a ‘Guide to Beach Litter’ using the litter I collected from along the strandline. The process of laying out the litter made me realise how complex the decisions to decide what to include in the Guide will be, in order to highlight the different : materials ,  hazards, and groups of people responsible for the litter.

The item that drew most attention was in fact the collection of minute  fragments of mixed platic pieces and fibres that are found in the sand and amongst the seaweed.  I explained that these fibres and micro plastic particles are now being ingested by fish and marine organisms. The conversations reminded me of my dismay at being told by marine biologist Dr Philip Cowie  that organisms as small as sandhoppers had been found to ingest micro-plastic fibres.  As I had the ‘lab’ all set up I placed a (found) dead sand- hopper under the microscope and placed fibres beneath it to explore the visual connection. An idea I intend to pursue. 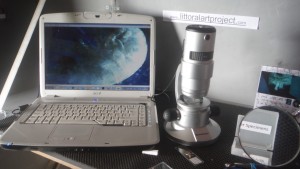 I was asked what I was filming as I shook a glass flaskcontain in front of the camera.  I explained that I was experimenting with the idea of how it would feel to be in the sea surrounded by plastic particles rather than plankton.

‘Yours is a great project and is doing a great job to make us aware of our environment. When you think about it the way we live has to change! ‘ Hugh from Whithorn

To celebrate these  encouraging comments in the Littoral Art Project’s work,  I spent the evening translating their verbal votes of confidence into visual votes on the beach.  As the tide receding I marked out  two X’s  using ‘litter lines’ made of prawn boxes and gun wads stitched together on Isle Martin last May.   One for #cleanseas and the other for #cleanbeaches 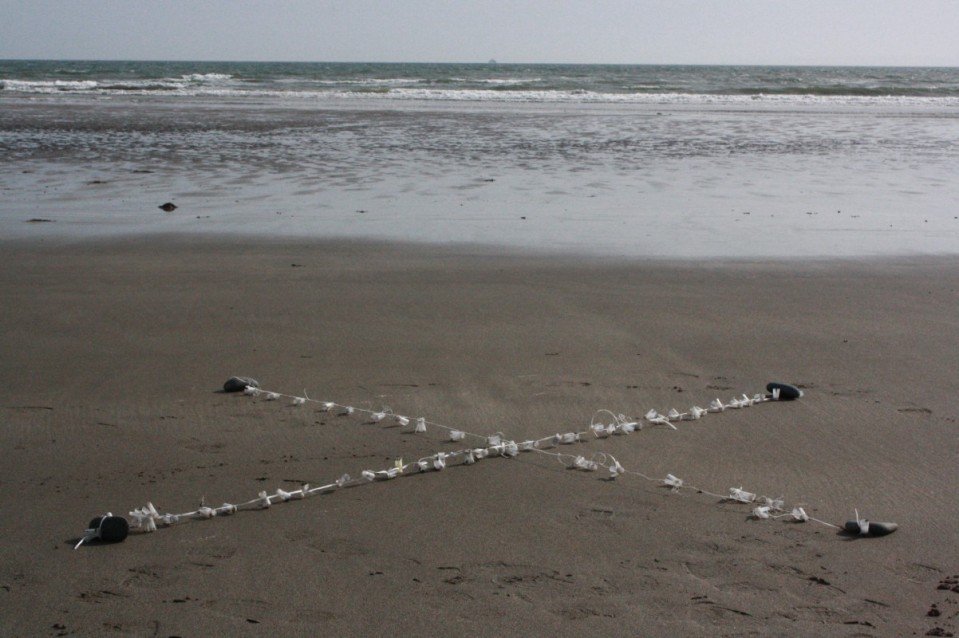 A full compliment of X’s will follow soon with the appeal and sponsorship update. Many thanks to everyone who pledged support, together there has been over £1,000 pledged. I am presently setting up a  [donate] button on the blog and I hope everyone will be happy to donate their pledges via this PayPal system instead of via kickstarter. Thank you! 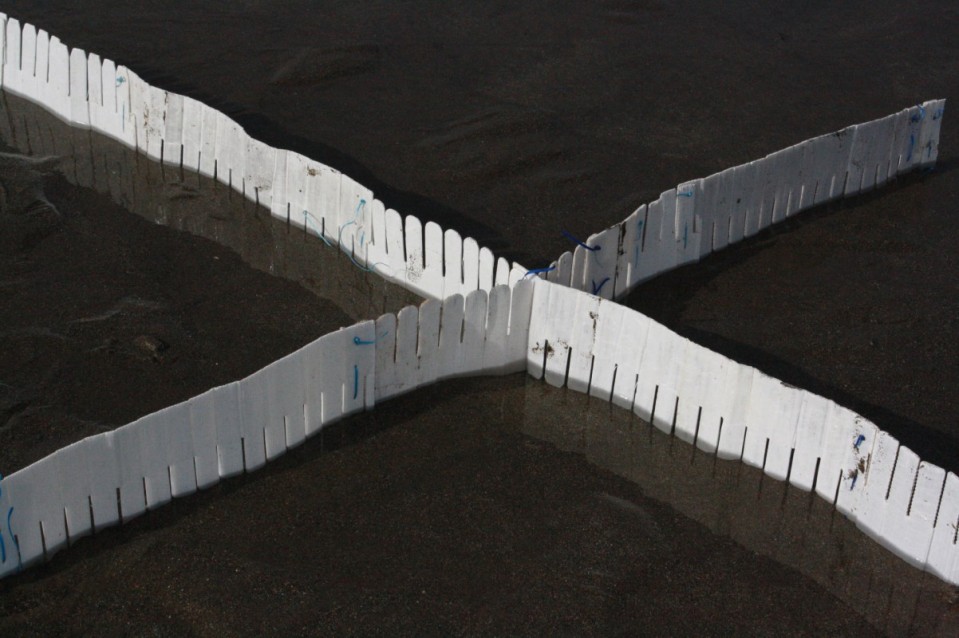