As the year comes to a close I have been taking stock of the littoral project  to see what has been achieved.

Setting up a studio at An talla Solais in Ullapool, meeting tens of people in the area concerned with the litter on the beaches . Learning about litter on the beaches in Ullapool   with Dougie Mac Crimmond. Finding a beach with very little rubbish on it  Achnahaird. Hearing that two oranges launched along the coast had been tracked by residents. Sharing my discoveries with people  e.g. the types  of litter found, magnifying the fragments  of litter  found on the beach and the harm they can cause, understanding the  longevity of the litter  items dropped and washed up.

The ‘future fossil’ hunt and  examination on the beaches showed me how the  chilling issue  of how long litter might last in the environment  can be approached in an imaginative way. Pupils comments and shock that a plastic bag on the beach might last until they (primary children) where grown up and had children and that a plastic  bottle might  be around longer than their children certainly was obviously provoking thought for both them and me .

The pupils loved the stone hunt and the ‘future fossil’ idea and it really caught their imagination. This was a highly creative way to stimulate thoughtful discussion of the issues around marine pollution.It stimulated discussion around how our beach litter will take many many years to decompose. Lesley Strachan, Head of Art, Ullapool High School

Julia Barton and the littoral art project engaged with all those who encountered her and her work. Whether through her workshops – the printmaking workshop at ATS was keenly attended – through her displays or involvement with the local schools and organisations her art and message is clear, welcoming, inclusive, thought provoking extremely relevant, fun and educational. S Garnett  ATS events co-ordinator

…that plastic bag could still be here when I’m married … ugh…the bottles have to go at the end of the line ….they could be around thousands of years?……where do we put paper on the line? It doesn’t take long to rot…let’s put it near to us…….2013  Lochinver School Pupil

‘I think having the different aspects – scientific survey, investigation and creative elements – meant that it appealed to many different people. It was certainly successful in highlighting the issue of beach litter.’  V Halcrow, Project Manager Coigach – Assynt Living Landscape

It’s great having new energy in Ullapool – it helps the many people concerned about the marine environment and the pollution that is threatening it. So many local people clean the beaches near to us, so having you drawing attention to the state of the beaches is really helpful. Ailsa resident. (marine biologist)

Thanks for making me more aware of the horrible amounts of litter we see along our beautiful coastline.  Ann Hoffmann resident

My question is now how should  the project  move forward?

Where did the strange rocks on the beach appear from ?

The tens of  ‘stones/rocks’ found on the beaches at Lochinver, Achiltibuie and Ullapool where cast by me at the Edinburgh Sculpture Workshop, using plaster  each containing a different object/s which came from the beaches I placed them on.

Each ‘stone’ was shaped in clay and cast in two halves to ensure we could open them to reveal the ‘fossils’.

The process of discovering and examining the stones certainly focused attention on the type of materials that litter the beaches.  Each beach litter fossil was discussed and identification notes made:  i.e.  material, location found, estimated date it could  be found if left on the beach e.g.  plasic rope  2413, aluminium container 2213,  cigarettes with plastic filters 2033, plastic carrier bags 2053, glass bottles …… 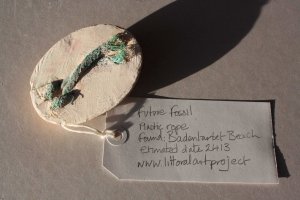 The full Littoral Future Fossil collection will be on show in the spring along with prints,  installations of timelines and littoral art project products such as postcards, posters and mugs …..a whole new range of holiday memorabilia  with an underlying message, don’t leave anything behind on the beaches, take care of our beautiful fragile environments.