As I head North again through a submerged southern English landscape which is still  suffering from this winters Extreme Weather events, I took time this weekend to stop off and  join the Oxford Climate Forum an annual student led conference  which provided a platform for a wide range of passionate expert speakers under the banner ‘Climate Change: An Opportunity’. Their goal like mine through the Littoral art project being to inspire people to play a role in the solution of tackling and mitigating the connected problems of beach litter pollution and Climate Change 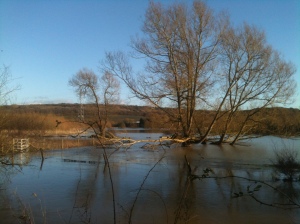 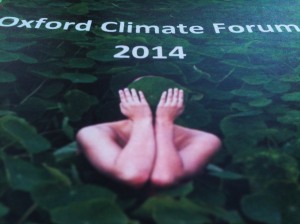 The speakers from across the world and across the disciplines put forward evidence to show that Climate Change is a concern and opportunity for everyone to be looking to solve. The  keynote speech from Dipal Barua was wonderful example of on the ground positive action of  affordable solar power being able to improve living conditions of rural communities by providing electricity at the same time as cutting Green House Gas emissions kerosene lamps, plus the benefits of rural employment in the support training for solar maintenance engineers particularly for Women. The Bright Green Energy Foundation  by putting into place affordable financing system means that by 2013 2.8million Solar Home Systems had been installed in Bangladesh in remote areas, their aim is to provide 50% population with polar power by 2020 becoming the first Solar Nation!

This amazing story was followed by an Energy Panel consisting a group of experts who are engaged in researching areas of energy generation methods, applications, demands, efficiency and sustainability, each gave their view of the energy situation in the wealthy nations. They agreed that the potential of solar power in the UK could only  predictably play a very small role, renewable energy was seen as a smart but at the moment having only a small impact, with most power still coming from fossil and nuclear fuels. Points of consensus on the production side included  the need to capture emissions, invest in better grid systems, invest in efficient power storage , integrate power sources and improve long term financing systems . On the demand side Dr Nick Eyre made a strong argument for social change as a means to reduce energy consumption as individual households consume 50% of energy used in Europe & the US. The biggest reduction in demand for energy so far has been attributed to energy saving light bulb measures!  Another positive example of the effectiveness of social change has been seen in London with the introduction of congestion charges and improved public transport, a comparison of city commutes found that the cost of the per capita commute was of emissions was 50% less than in any other city!

The need to reduce the energy consumption of transport was highlighted many times by many contributors’ throughout the forum, with David Buckland (artist) sharing the disturbing grim details of the US’s  daily consumption of fuel  being 400,000,000 gallons with the added details that most of the energy in cars and vans is spent moving the vehicle and not the person .

Buckland is the founder and director of the Cape Farewell project which has immersed scientists and artists for over a decade in environments threatened in by climate change. Having recently visited Cape Farewell’s Seachange  (Tionndadh na Mara in Gaelic) exhibition at the Edinburgh Botanics  which celebrated the work of 30  artists and scientists who worked collaboratively and independently to consider the relationships between people, place and resources in the context of climate change  on the Western Isles from Mull and the Small Isles, Skye and the Inner and Outer Hebrides to St Kilda, Lewis, Rona and the Shiants.  Last year a follow up expedition to Orkney & Shetland found writer Gorm Ashurst  posting a an expedition blog Nano Incursion about walking into a tiny bay on the west of Shetland. His record highlighting how even on this island with the sparsest of populations he found similar beach litter scenes  to those we are familiar with on the mainland and all along the Scottish, UK and World beaches.

Buckland’s quest for founding the project was to understand and make the language of Climate Change more accessible, he and the artists  that join the project expeditions create images, poetry, installations, films, stories that visualise what is happening to our climate. The  artist’s work that Buckland shared in his passionate lecture was poignant, engaging and inspirational.

His own recent addition to the project being the installation of a ‘ready made’ which took the form of a combustion engine appropriately located in Texas,  which brought home the significant part that this technology has in the  debate .  Cape Farewell  with its scientific partners is presently focusing on the idea of visioning an ‘Energy Renaissance’ which develops the most efficient energy sources  across the world capturing solar energy from the Sahara and distributes the power to populations  through a super efficient grid. Here in the UK utilizing geothermal energy from beneath our feet and harnessing tidal energy from around the coast.

Plans for the first tidal lagoon are well underway for Swansea Bay, the vision being for the lagoon to generate electricity, and to be a conservation and cultural resource. It is estimated that five tidal lagoons around the UK could by 2018-25 produce 10% of the UK’s energy. Such bold projects in tandem with better transport systems and changes in social habits that reduce the demand for more energy would indeed be a great start to an Energy Renaissance.

From this talk in particular and from the many other fascinating contributions I have broadened my knowledge and understanding of Climate Change and topped up my own power store of enthusiasm. With which I intend  to develop my practice as an artist working to inspire others about the issue of beach litter and our need to change our social habits that are its cause. I hope to share more of the CF contributions in future posts .