I towed the last litter lines off the island on Sunday. The corrugated plastic sections of prawn boxes float well, but as I pulled away from the pontoon the slits in the box sections caught on to one another  creating an underwater knot which kept wrapping around as I doubled back to the the pontoon. Pausing to to unravel the knot  I realised the  rubber gloves tied on the end  section had unbalanced the line causing it to twist. Pulling the rubber glove and gun cartridge lines into the boat I set off again this time a  broad  white  line was drawn across the surface of the  loch leading from the boat to the island .  A  strong symbolic  mark denoting the three weeks work mapping collecting and removing removing the washed up litter on an a small uninhabited island.

The litter lines drawn across the loch have been recorded and will form the starting point for a  series of future visual statements  about the nature and volume of  beach litter along our coast. I intend to bring the development is work back to Ullapool in the autumn, to celebrate the work of the Littoral Art Project’s work here  with all those who have taken part over the past year. 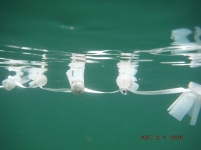 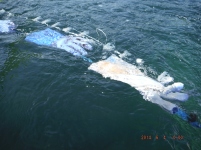