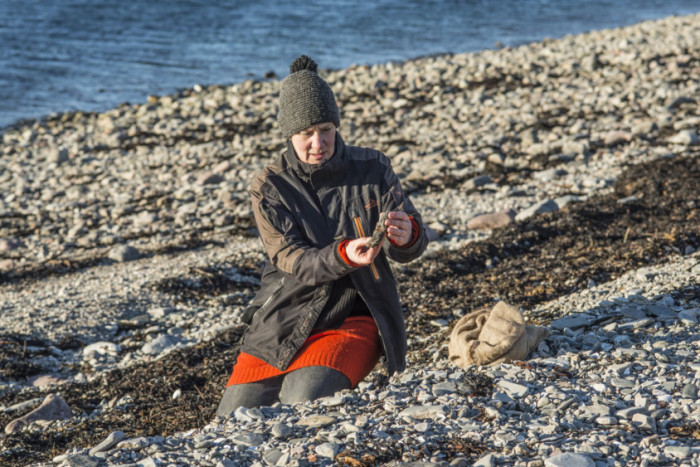 Researchers say these ‘rocks’ now form a marker of human pollution on the geologic record and some believe they may survive as future fossils. Julia uses them to make islands and archipelagos which she displays on a giant ‘map’.

The exhibition is being used as a powerful warning about the future of the marine environment. Julia Barton’s NEO Terra exhibition – at An Talla Solais Gallery in Ullapool – is the culmination of four years of research which began in Ullapool and has taken her to 60 beaches from Gairloch to Cape Wrath, as well as Orkney and Shetland. Later this year the work will travel to the Scottish Parliament in Edinburgh to highlight the impact of marine plastics to ministers and MSPs.

The centrepiece of the exhibition is a large floor-based ‘map’ featuring islands using ‘rocks’ made from melted plastic. The ‘plastiglomerate’ are now common on some beaches as people burn the waste they find and Julia has collected thousands of them. NEO Terra also includes an interactive area where visitors are invited to take a closer look at the collected beach samples through microscopes. Julia hopes the work will make people think about the volume of plastic seeping onto our shores and how long it will remain there damaging the environment.

She said: “What you actually see on beaches is just the tip of the iceberg and nothing compared to the unseen particles which break down into sand grains. “The lifespan of these materials outlives us, our children and our grandchildren. It’s insidious and we need to address how it got there.” Julia has worked on educational projects helping school pupils to survey beaches and raising awareness about what they find and how it got there. Some have been inspired to write to pharmaceutical companies and politicians requesting change. In February Johnson & Johnson joined some of the major supermarkets by bowing to public pressure to replace plastic stems in cotton buds with paper. The move will prevent more plastic reaching the seas and harming marine life. More than 300 million tons of plastic are produced globally each year and 10% ends up in the sea. It’s estimated by some reports that there is now a 1:2 ratio of plastic to plankton and that plastic will outweigh fish by 2050 if the problem is left unchecked.

Working with communities has always been a strong feature of Julia’s approach and she’ll be taking part in a series of events during the exhibition including a walk along Isle Martin beach as part of the upcoming Isle Martin Festival and a World Ocean Day event in early June. Julia hopes her creative perspective on a serious environmental issue might connect with new audiences. She said: “I’d really like to take the exhibition to other coastal areas and deliver the educational programme there. I’m delighted to have the opportunity to present the information I have collected to ministers and environmental organisations.

“Art can successfully engage with the important issues of the day and make a difference.” NEO Terra by Julia Barton opened this month at An Talla Solais Gallery, The Caledonian Hotel (West Argyle Street entrance), Ullapool. The exhibition will be open daily from 10am to 5pm until June 18th. The exhibition is made with support from The National Lottery through Creative Scotland.

2016 REVIEW: The Littoral Project: An Exhibition That Provokes And Inspires

Plastic has been part of our lives for decades. It turns up in myriad forms, from food or drink containers to household equipment or major components of cars or boats. Unfortunately, too, it appears in many places where it does harm, for a large proportion of what we use is simply thrown away. Marine litter, most of which is plastic, has created huge, floating garbage patches; one of these, reportedly twice the size of Texas, lies off the Californian coast. There is increasing concern about the less obvious ways in which plastic is finding its way into the food chain. Micro-plastics, formed either through the erosion of larger pieces or the use of tiny plastic beads in products such as facial scrubs, are ingested by fish and ultimately by humans.

Over the years, people in Shetland have been instrumental in tackling the problem, both at a local level through the annual Voar Redd-Up (spring clean) and through supporting initiatives such as Fishing for Litter. 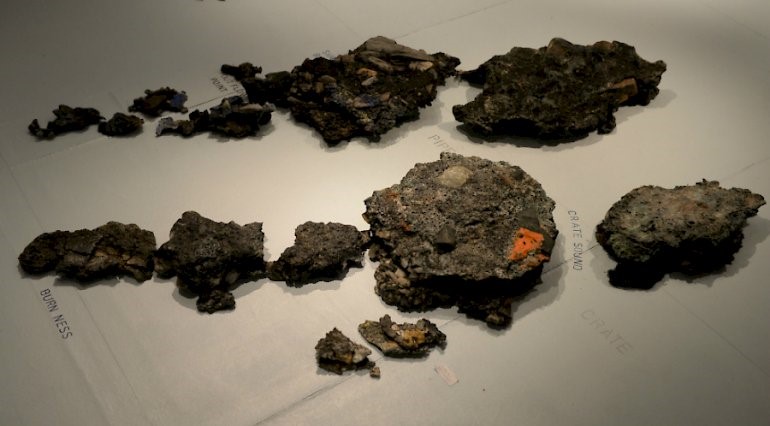 Now, Neo Terra, an installation at the Shetland Museum and Archives, explores these issues. It’s part of the Littoral Art Project and the artist responsible, Julia Barton, says:

“Plastic in all its forms is weaving itself into the fabric of the earth’s ecosystems and earth itself, silently burying within because little is being done to prevent or manage it. The stark prediction is that it will provide a future legacy and record of our human interaction with the earth – an environmental catastrophe in waiting.”

Julia has been working on the project for three years. She began in Ross-shire and is now working her way around the Shetland coastline. She has been collecting many examples of the different forms of plastic pollution and has brought one particular aspect of the problem – that of “plastiglomerates” into sharp focus. Plastiglomerates are typically formed when plastic is burned on, say, a pebble and sand beach. As Julia explained to me, this happens all over the world, wherever people decide that the best way to get rid of that growing mound of plastic is to set light to it. The plastic melts into the sand and rock and the result is now acknowledged by scientists as a marker of human pollution on the geological record.

…. this happens all over the world….

The project has a strong educational emphasis. In Spring 2016, Julia worked with Da Voar Redd-Up, the award-winning project which has been running since 1986 and is the largest community clean-up in Britain, involving more than 20% of Shetland’s population. She led workshops to raise awareness of the problem and explore ways of tackling it. Fifteen schools throughout the islands were involved and 227 pupils between primary 1 and secondary 4 took part. They examined sources of litter, the harm it can cause, degradation rates and those micro-plastics.

The installation is in two parts. On entering the gallery, the floor is covered by examples of plastiglomerates chosen from among the thousands of examples that Julia has collected. The pieces are arranged as though they were islands in an ocean and Julia has been giving them appropriate names.

It’s a sobering sight; but behind a screen, visitors can examine many more, equally arresting, examples of plastic pollution, ranging from tiny fragments to the larger examples of common plastic pollution, for example the plastic baling strip often used to hold goods together on pallets and which is so dangerous to marine wildlife. There’s also an excellent animation by Shetland videographer J.J. Jamieson in which a (plastic) geologist is seen exploring the new plastiglomerate geology; it doesn’t end well. Panels of photographs record the work that was done in the school workshops and a timeline indicates the extraordinarily long time – in some cases, tens of thousands of years – that plastics persist in the environment.

Sita Goudie, Environmental Improvement Officer at Shetland Amenity Trust, said that Julia’s creative approach “really makes you think about this serious environmental issue and how we can all influence the amount of litter entering the marine environment. The workshops she undertook throughout Shetland in the Spring really inspired the children”.

The workshops…really inspired the children

Certainly, the installation has made an impact on those who’ve seen it. Many visitors have said that they found it “thought-provoking” or “worrying”, but – at the same time – “inspired and inspiring”; “amazing”, “fascinating” and “important, wonderful work”. It certainly represents a call to action and will undoubtedly influence many people to do what they can to minimise the plastic problem in their own daily lives.

The exhibition runs in Shetland until 12 November. Later, it will travel to An Talla Solais Caledonian Gallery in Ullapool and then to Edinburgh.